The general flowchart of a crane structure residual life assessment could be split into two basic stages. On the first stage crane structure critical elements are determined usually using the Finite Element Analysis (FEA) for the given operational parameters (i.e. safe working load, maximum outreach and back reach, speed of mechanisms etc.). On the second stage the fatigue life of the critical elements is calculated using the same Finite Element (FE) model.

The key factor for such approach is the availability of the crane structural drawings, which allows to create precise FE model. And here the main problem appears that to find the drawings for the old machines is sometimes either a big problem or even impossible (i.e. the manufacturer company does not exist anymore). Similar problem could be challenging even for new cranes. The approach described in this paper allows to overcome the drawing absence problem by using the following modifications of the aforementioned procedure: critical elements are found using Non Destructive Testing (NDT); FE models of the critical areas are created using local structure measurements; FE analysis is performed using strain gauge measurements for Boundary Conditions during the crane operation.

The main flow of the proposed approach is that the residual life could be calculated for the crane operational parameters, the measurements have been performed for. Despite the paper uses crane structure as an example, the approach is general and it could be transferred on different types of steel structures.

In the engineering practice the mostly used approach for stress analysis is Finite Element Analysis (FEA). In order to perform the FEA for the crane structure the following information about the crane must be presented:

This information could be taken from the structural drawings of the crane. Normally the crane owner may have the drawings, but in reality, it is quite hard to find the drawings especially for the machine that has been in operation for more than 20 years. Of course, one more way to find this information is to contact the crane manufacturer. However, it could lead at least to additional expenses to buy those drawings or sometimes the company does not even exist anymore and it is impossible to enquire the documents.

In this paper the approach that allows to overcome the structural drawing absence problem is proposed. As an example, the approach is used for 38-year-old Quay Grab Unloader residual life estimation as the FEA is a basic part of such type of project.

The idea of the approach is to find several critical elements of the crane, create the FE submodels for each of them based on geometrical measurements, performed on site. And instead of taking the boundary conditions (the forces that represent the action of the rest of the crane on the submodel) for these submodels from the whole crane Finite Element Analysis, get them from the processing of strain gauge signal measured during crane operation.

More detailed description of each step is given farther on.

Structural survey. During the structural surveying the fatigue cracks of significant length have been found in the sea side Trolley Girder Support Beam (TGSB), near its center, where pulleys are attached Fig. 1. Thus, the critical element based on structural survey is TGSB central part. 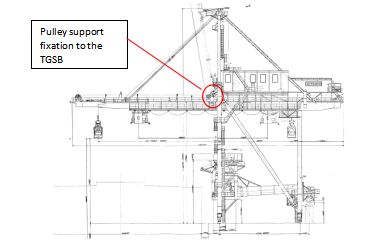 Based on the measured coercive force parameter it appears that the critical elements are Boom and Girder.

Combining the surveying results the following critical elements have been taken for the further residual life assessment (see Fig. 2): 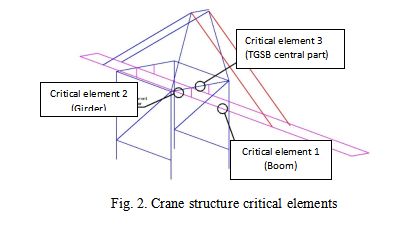 Based on the geometrical measurements performed on site (i.e. member cross section height, width, flange and web thicknesses, bulkheads’ and stiffeners’ geometry etc.) the FE models of the critical elements have been created. As the further analysis is planned to utilize the Linear Fracture Mechanics approach one or two cracks have been introduced acc. [5] to each submodel (there are several models for each critical element where the only difference is the crack length). The cracks’ positions are based on preliminary analysis of the element without crack and the cracks were introduced in the areas with the biggest stress range. Each crack is oriented to be normal to the first principal strain. The linear material behavior model is used. 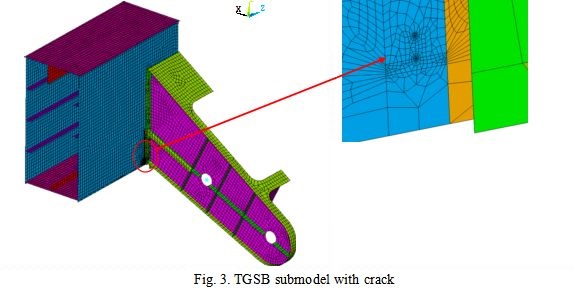 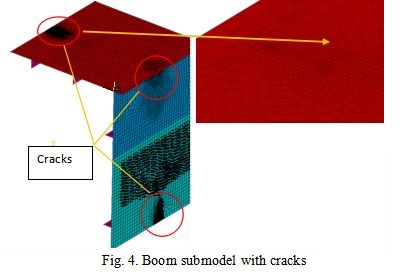 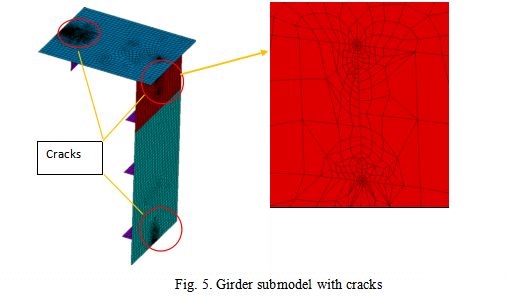 Concept. Firstly, we have to find out the normal and shear stress distribution in a cross section which is used for the further boundary condition application. Then we could decide about the minimum amount of the strain gauges, their axis directions and positions along the section.

The appropriate stress type (normal and/or shear) is calculated for each load component and the resultant stress distribution is found as a stress superposition. The following rules for the stress signs are used acc. [6]:

Normal stress from normal to the cross section force Fx: 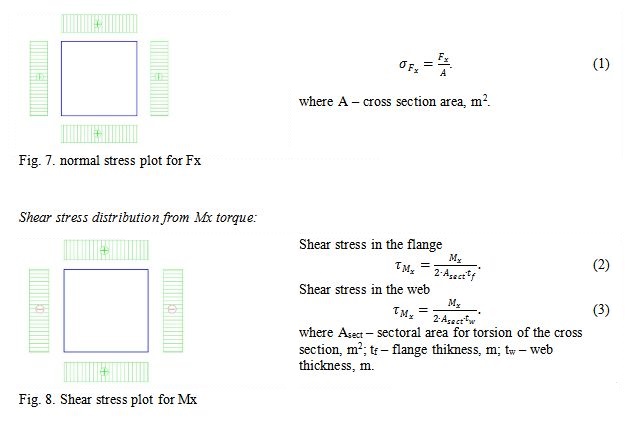 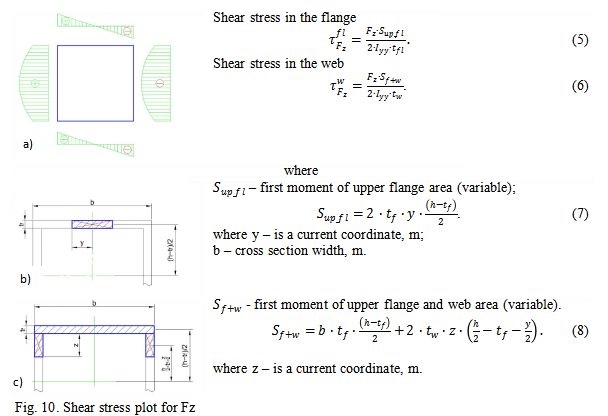 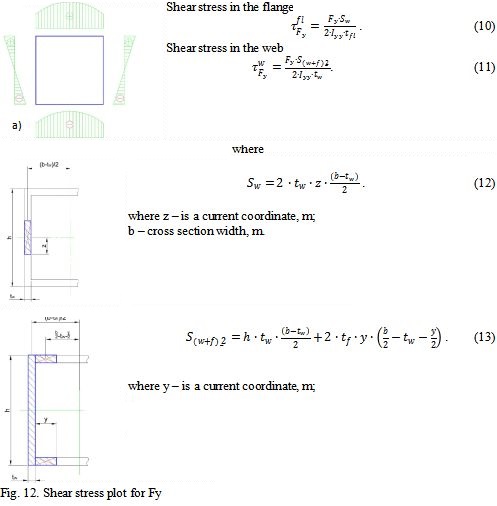 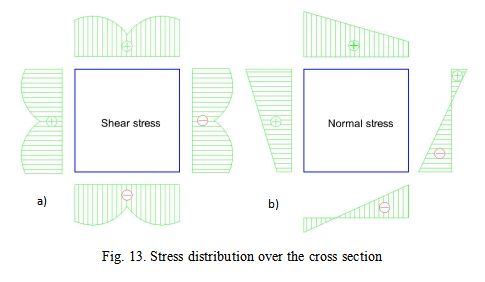 Stress distribution over the cross section.

Stress superposition for all forces and moments is shown on Fig. 13. 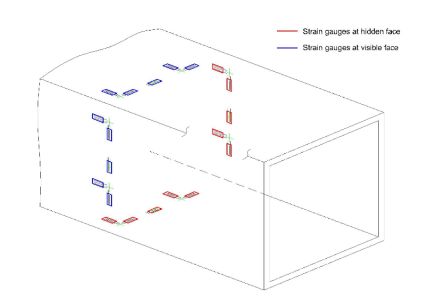 The stress has been measured during 26 crane operational cycles using the modern 64-channel data acquisition device, Fig. 15. The device has several position sensors that were located along the Boom and Girder to show the trolley position during the measurements.

The strain gauges have been attached from the inner side of the structure. The gauges, positioned along and transversely to the critical element axis, were used; the positions are shown in Fig. 16 by arrows that are the gauge center lines. 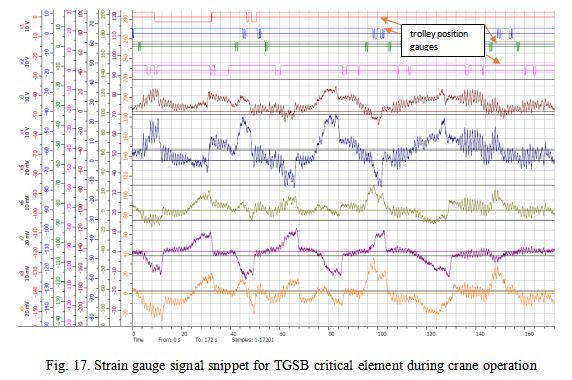 The snippet of measured signals from the strain gauges vs time are shown in Fig. 17.

The calibration coefficient to convert measured signal in volts to strain has been taken from laboratory tests (for each channel) using the specially designed beam (Fig. 18) with varying width to provide constant strain all over its length.

On the first step strain gauge signal in volts was measured for test weights of 0, 0.5 kg, 1 kg, 1.5 kg and 2 kg. Then the corresponding strain magnitudes were calculated for all applied test loads using Strength of Material approach. This allowed to plot point in strain vs voltage axes.

On the second step the calibration coefficient was calculated using linear interpolation for strain vs voltage signal plot.

Using calibration coefficient Initial signal from the strain gauge (electrical voltage) has been converted to strain (Fig. 19, a; Step 1), then to stress (Fig. 19, b; Step 2), filtered out [7] and the stress cycles were extracted using Range-Pair Counting Method algorithm [8], Fig. 19.

Based on the stress at the points where the strain gauges are placed the stress distribution diagram along each plate edge has been reconstructed for normal (Step 3) and shear (Step 4) stresses, Fig. 20. 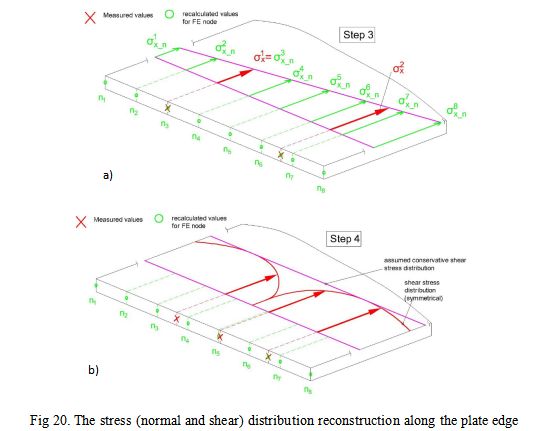 The stress (normal and shear) distribution reconstruction along the plate edge

Finally, knowing number of FE along each edge, plate thickness and FE edge length, the stress to the FE edge has been converted to nodal forces, Fig. 21. In order to automatize the aforementioned steps C++ based programs and ANSYS APDL language macros have been used. 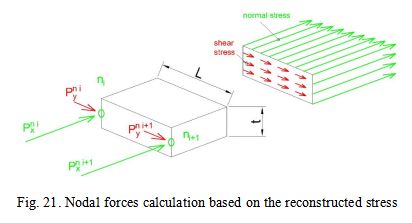 Nodal forces calculation based on the reconstructed stress 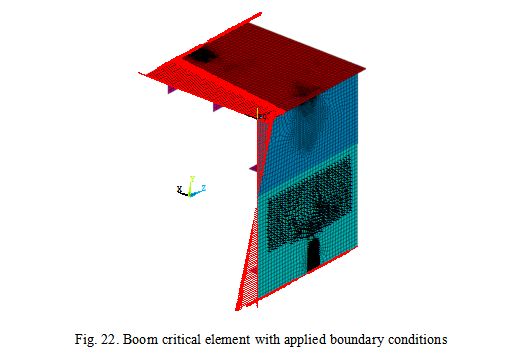 The following material tests have been performed to find out the degraded properties of the Ship Unloader grade: 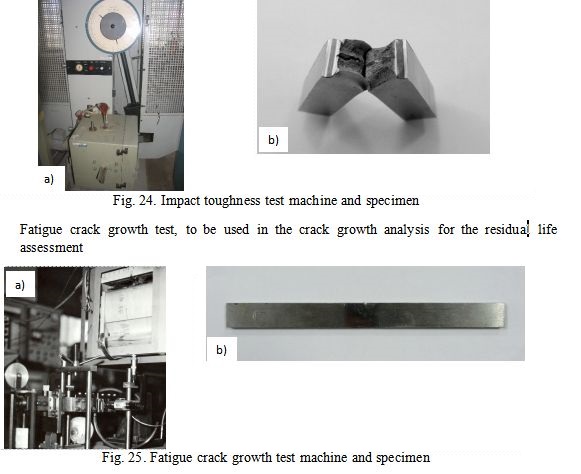 It is found that

The residual life has been calculated acc. [9] based on linear fracture analysis, which utilizes Paris low:

The cycles with SIF amplitude which is more than 0 have been considered in analysis. Also cycles with compression stress in the crack tip have been excluded.

Having analyzed all three submodels (Boom, Girder and TGSB) it was found that the element with the lowest value of the residual life is the TGSB with the critical area of the sheave support flange connection. The residual life of the unloader after repair, based on the fatigue analysis of its critical element, is approximately 9.7 years. It has been assumed that the crane will work with the same regime (same Safe Working Load, mechanisms accelerations etc.).

Advantages of the approach

Disadvantages of the approach