Abstract. For the last decades, fully erected container cranes have been delivered to a customer site by ships. On one hand, using this method of transportation is very attractive due to its cost and time savings. But on the other hand, being exposed to cycling loads from the ship motions during the sea voyage, the crane structure accumulates fatigue damage. Using the accumulated fatigue damage parameter, the crane transportation could be associated with the amount of the working cycles the crane could have worked out during its normal operating at the customer site. In the presenting paper the research for the real case of a new crane voyage from China to Ukraine has been done.

Introduction. In general practice of lifting cranes they could be delivered from the manufacturer factory to a customer site in two different ways:

1. Statement of research problems and the technique for their decision.
The main disadvantage of the crane delivery by means of sea transportation could be understood after a closer look at the cyclic loads, which act on the carried crane from the ship motions along the whole voyage. The loads could have quite significant magnitude and amount of cycles, which leads to fatigue damage accumulation (Murakami, 2012) in the crane elements and joints. In the other words it means that after a new crane is delivered by sea to the customer site it is not a new anymore, but has a condition which is equivalent to being in operation for some time.

Of course, each transportation case is individual and the following cases are possible:

The main goal of the current research is in finding out if the delivery of the fully erected Ship to shore crane by vessel damages the crane by decreasing its service life and in the case of positive answer assess this damage in terms of working cycles. The main parameter that is checked by structural engineers on the project preparation stage is the static strength of the crane structure, lashing elements, deck of the carrying vessel and all the reinforcements. Unfortunately, investigations of the influence of a fully erected crane transportation by sea on its residual life, which involves fatigue analysis of the structure but not only static strength, have not been found. In this paper, the analysis for specific case has been done in order to assess such influence.

Thus, the novelty of the current research is in the investigation of carried crane service life decreasing due to the sea voyage based on fatigue damage accumulation assessment.

A real case of a ZPMC© quay crane delivery from China to Ukraine has been used for this analysis. The route is shown in fig.1. 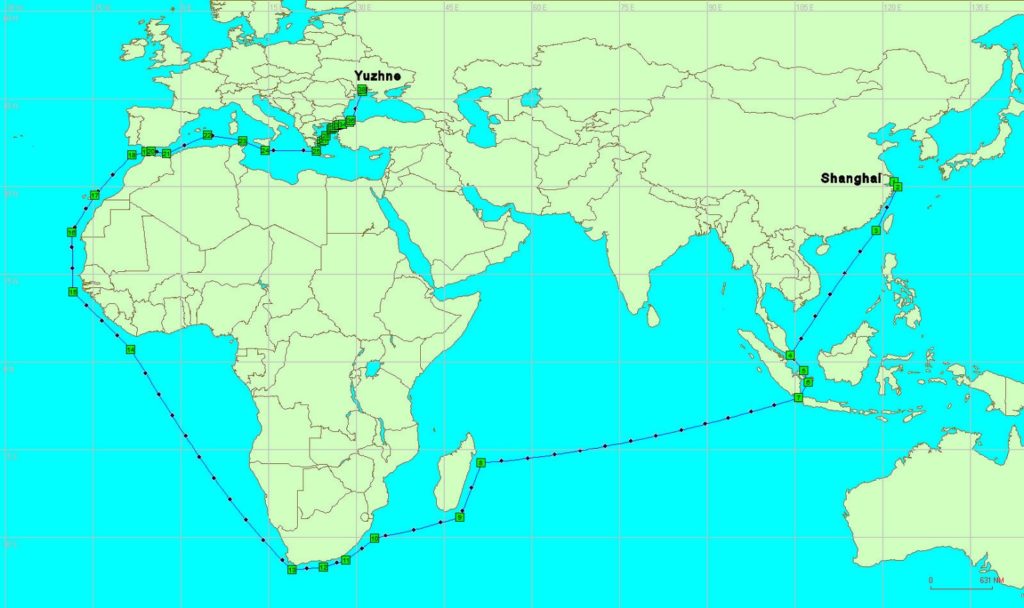 Figure 1. The ZPMC vessel route, which transports the quay crane from Shanghai (China) to Yuzhne (Ukraine). The small green squares contain the date when the ship passed the point

The basic crane (fig. 2) parameters are as follows: 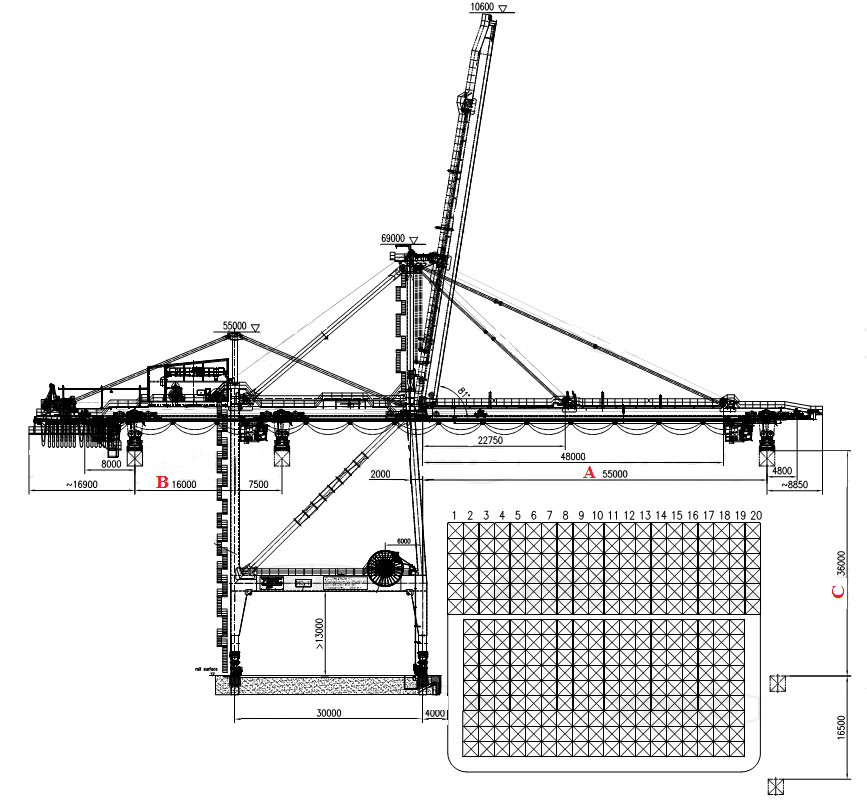 Figure 2. The quay crane general arrangement. The cross section of the container carrier with the numbers of container rows are shown at the right lower corner (#1-#20)

The cranes position on the ship during its transportation is shown in figure 3.

Figure 3. The crane on the ship’s deck

The analysis of the crane has been split into three major stages. On the first stage the loads on the crane structure due to the ship motions have been calculated. The second stage involves finite element analysis for crane static strength under the influence of the mentioned above loads. On the last stage, based on the obtained stress data for the crane structure during the voyage and using a specially created program, fatigue damage accumulated in the crane structure has been calculated.
2. Loads from ship motion determination
Based on the limited data available, the ZHEN HUA 11 vessel was modeled based on the hull of a standard bulk carrier, converted into the crane carrier, with identical dimensions (similar to the real – full scale – conversion) (Van Hoorn, Container crane transportation option: Self-propelled ship versus towed barge, 2005), (F. van Hoorn, Wijsmuller Transport B.V. and S.D. Devoy, Matthews-Daniel Co.,, 1990). For the computer model of the resulting hull, see figure 4 the loading condition was prepared based on the crane and RTG data, estimated lightship of the vessel, and some additional weights for bunkers, ballast, and some miscellaneous. The approximate stowage plan is presented in figure 5.

For the environmental conditions for the voyage from Shanghai, China, to Yuzhne, Ukraine, the Global Wave Statistics were used. A combined voyage scatter diagram was made by adding all scatter diagrams for the areas crossed together, each weighted with a transit time factor. The same wave data base also provides wave direction statistics for the individual areas crossed (N. Hogben et al, 1986) (Van Hoorn, Heavy-Lift Transport Ships - Overview of Existing Fleet and Future Developments, 2008). Combining these with the transit times (exposures) resulting in the following probability for each class of wave heading:

With the combined total voyage scatter diagram and using the MOSES© software program, the vessel motions and point accelerations at the crane CG were calculated for each wave height – wave period combination. This resulted in double significant design acceleration scatter diagrams for each of the 3 main directions. For each direction, the linear accelerations were grouped in 0.1 g interval classes and the numbers in each class were totaled, as presented in table 2. The double or full cycle significant (mean of highest 1/3) values give a good representation of the accelerations acting on the crane CG in each of the three main directions.

The loads are represented by linear accelerations along all three axis that are considered to be applied to the crane center of gravity (table 2). Total amount of oscillations is 461 000, cycle time is 10 seconds.

Table 2. Accelerations applied at Center of Gravity of the crane structure due to the ship motions

LINK – for lashing ropes. Initial pretension (2 tones) in each rope has been modelled.

MPC – for modelling of joints with only rotational degree of freedom. In order to model the saddle pin behavior the boom-girder joint has been modelled with the rotation restrictions. 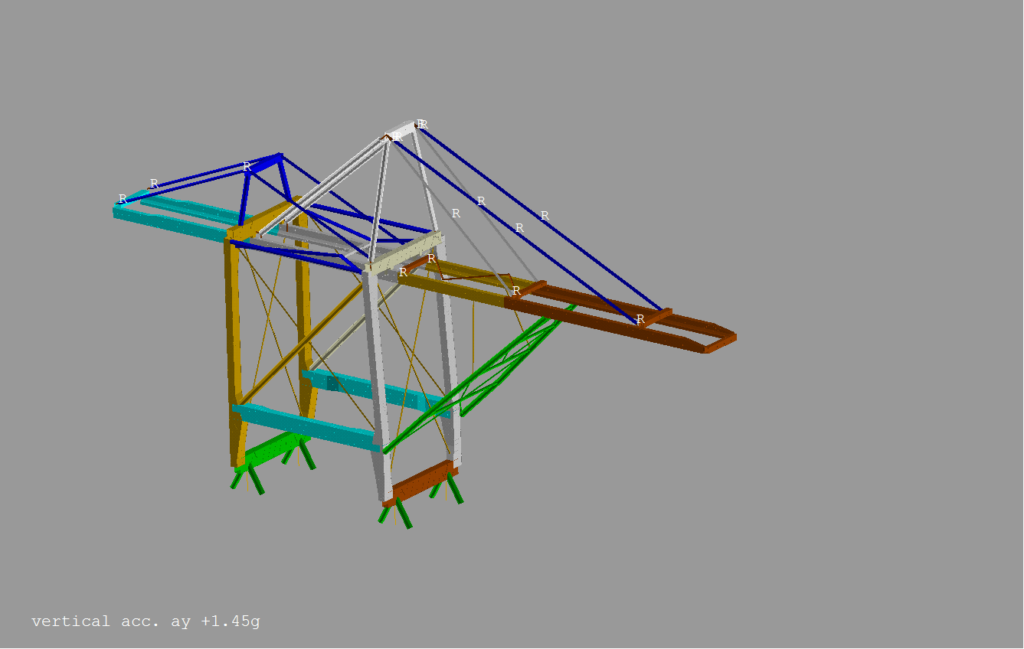 a) the beam model with shown beam element sections 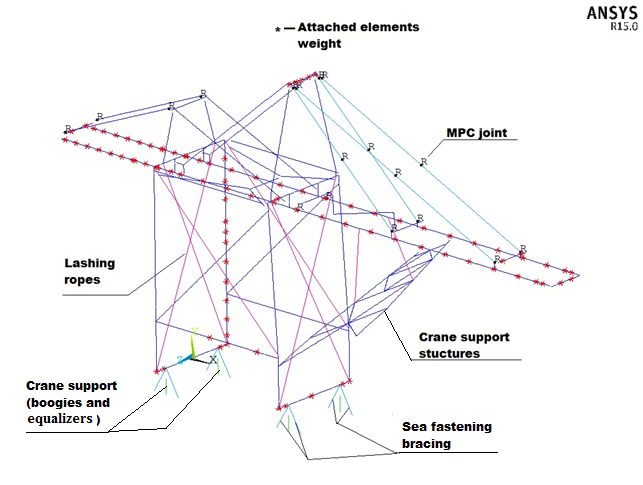 b) crane skeleton model (beam sections are turned off)

The linear model of a material behavior has been chosen with Young modulus of Pa and Poisson ratio of .

The first preparatory loading step corresponds to the quay crane situated on the ship deck just after its disposal. It means there are neither supporting nor reinforcing structures installed yet (fig. 7). The crane structure has been loaded by its self weight and prestressed lashing ropes. Under the applied forces the structure had the initial deformation. The crane support structures (boom propping frame including two lashing wire rope that connect middle of the frame with the boom; supporting tubes at all 4 corners of the gantry) have also been modelled on the first stage, but turned off using birth/death element technology.

On the second preparatory loading step, the crane support elements have been turned on (fig. 8), and started propping the initially deformed crane structure. The main point of the splitting the preparatory loading into two steps is to model real situation, when the support elements have been applied to the deformed crane structure and therefor the only stress that could appear in the reinforcement comes from ship motions and reinforcing elements self-weight.

The boundary conditions for the crane attachment to the ship deck modelling are shown in fig.9. 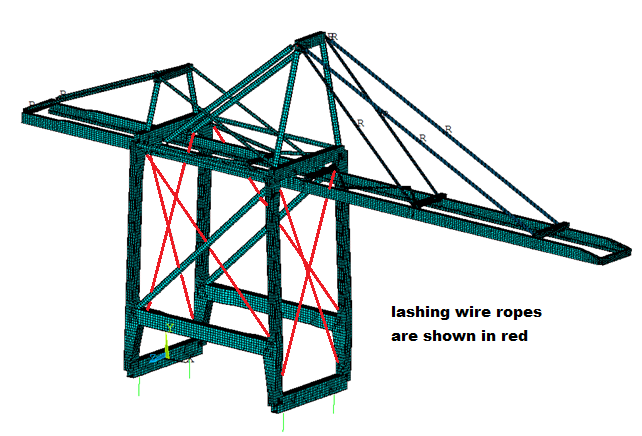 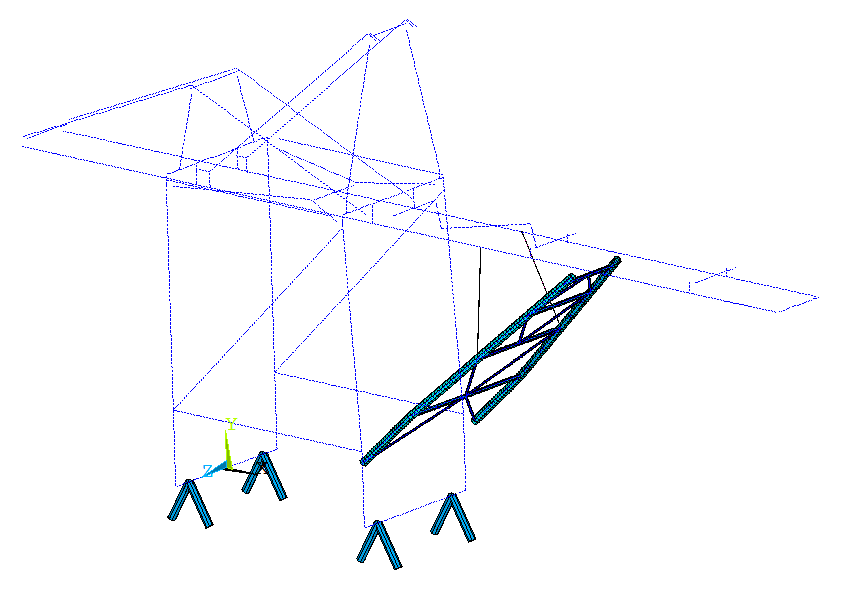 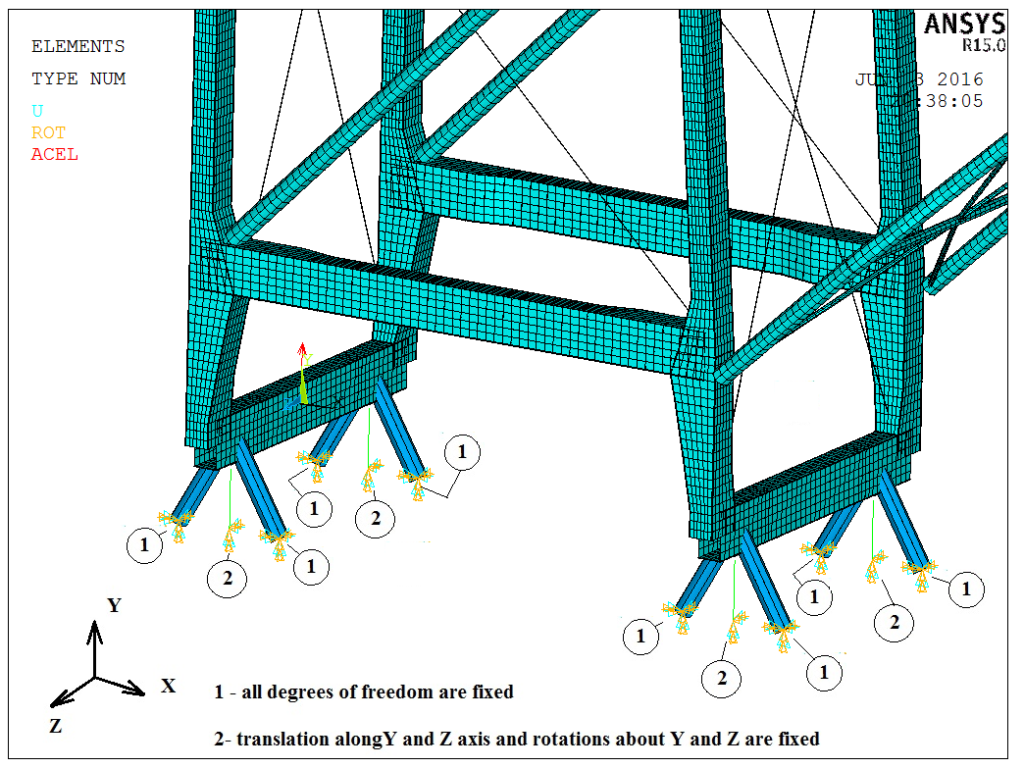 Figure 9. boundary conditions, applied to the crane structure at first and second phase

For instance, for the longitudinal acceleration class 0.2 - 0.3 g the mean value range of 0.25g has been taken and two loading cases have been created, first one with acceleration of +0.125g and the other with -0.125g. Subtracting the second loading case from the first one gives the loading case with the stress range in the crane structure.

In addition to the stress information for the further fatigue analysis, the information regarding structure elements fatigue classification (FAT class) (Draper, 2008) is needed. For this purpose the FAT class has been assigned to all elements of the crane main structure (fig.10). 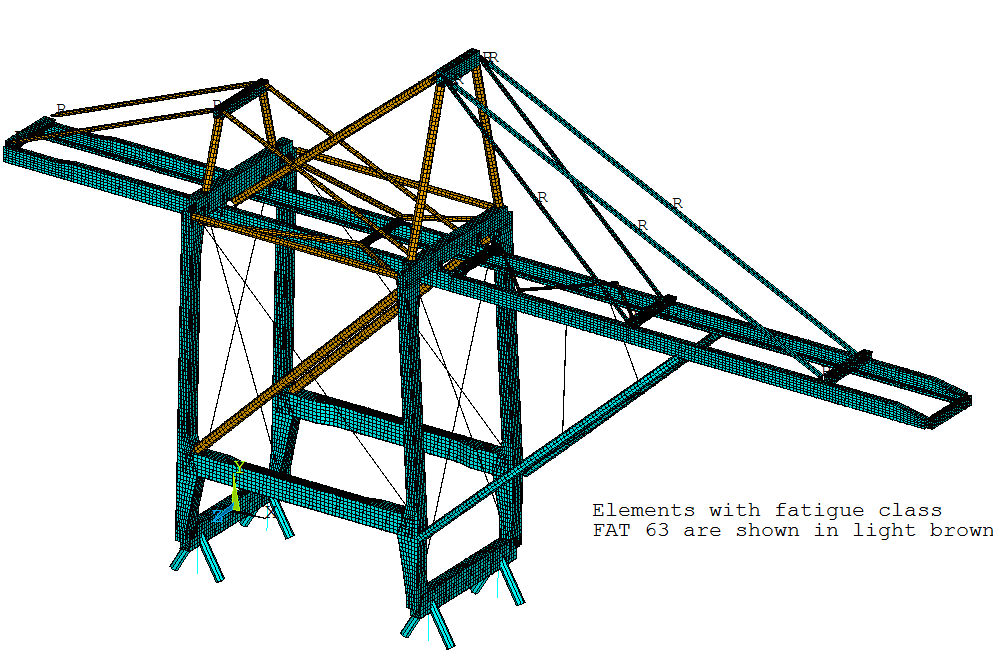 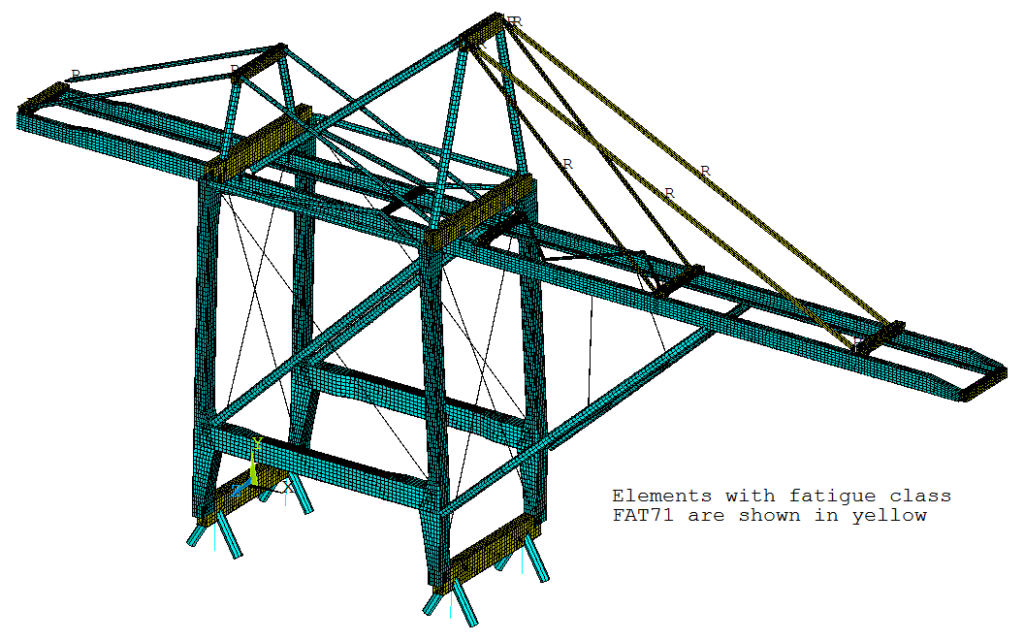 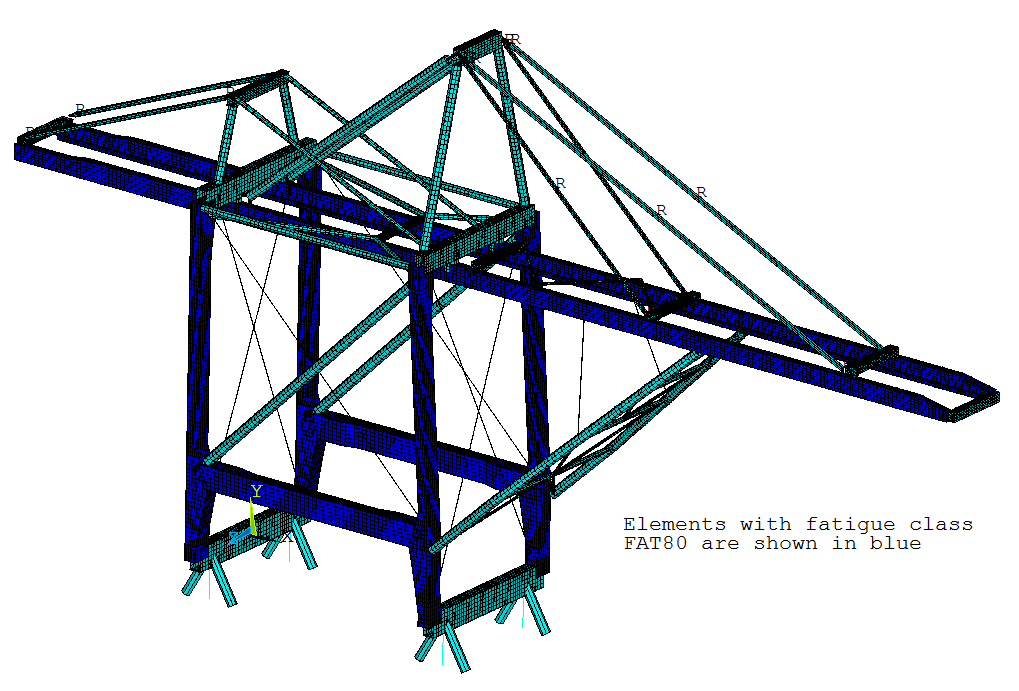 For the last phase of the analysis the special program has been created (Stroustrup, 2014) that uses the external information about structure elements FAT classification and the stress for loading cases for input data. The algorithm of the program is shown in fig. 11. 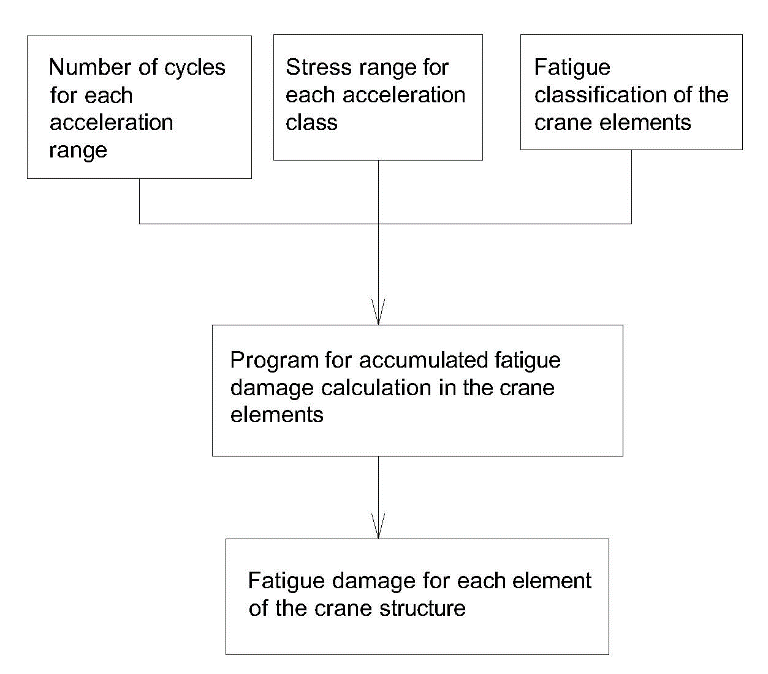 The result of the program operation is the information about accumulated fatigue damage in each element.

Basic assumptions, used in the program algorithm, are as follow

According to the recommendations for the fatigue analysis (Hobbacher) the critical accumulated fatigue damage value is 0.5 and according (FEM 1.001. Rules for the designing of hoisting appliances. 3rd edition, 1998) it is 1.0. 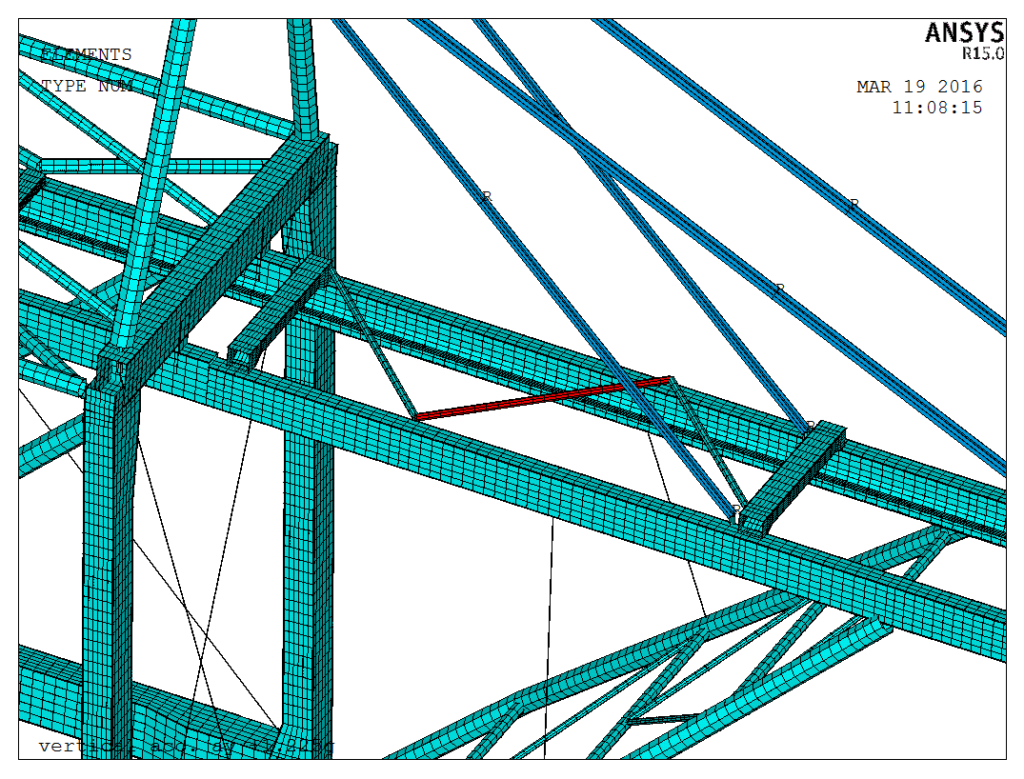 Figure 12. Elements with the maximal accumulated fatigue damage from 0.1 to 0.05 (boom diagonal, shown in red)

* the calculation is done

Of course, not all elements that have accumulated fatigue damage are critical from the fatigue point of view for normal operation. The good example is the boom diagonal, which is almost not loaded during the crane normal exploitation.
4. Discussion of the obtained results
According to the obtained results of the fatigue damage calculation, accumulated during the crane transportation by sea, it appears that up to 20% of the crane life has been used during its transportation. The crane that came down to the customer’s port was not the new crane, but already “used”. The fact the crane had lost such significant part of its structure life could give the customer some negotiation freedom in terms of either price reduction, increasing the warranty period or the other options.

For different cases of sea transportation such discussions between the manufacturer and customer should be based on the analysis, which could be similar to the one, shown here.

The performed analysis has been done based on accelerations of the ship, obtained from the computer modelling based on Global Wave Statistics (N. Hogben et al, 1986). The computer analysis very often gives overestimated results (Van Hoorn, Container crane transportation option: Self-propelled ship versus towed barge, 2005) and for more precise fatigue damage accumulation in the crane structure the strain measurement technic during the whole voyage could be used.

For this case before the voyage, the fatigue analysis should have been done in order to find the possibilities to minimize the accumulated fatigue damage by proper transportation plan (lowering down the CG of the whole crane by partly dismantling boom, girder and/or A-frame). The best transportation scheme is the one, for which the ship accelerations induces in the crane structure stresses with amplitude less than the endurance limit and the fatigue damage does not accumulates. Instead of this the manufacturer of the crane applied to the structure some reinforcements, but their positions and amount were decided from static strength point of view and that have not prevent fatigue damage accumulation.
5. Conclusion

Capitan, A. B. (1989). Use of Metereological Information for Warranty Surveying Purposes. The Nautical Institute, London.

Murakami, S. (2012). Damage Mechanics. A continuum Mechanics Approach to the Analysis of the Damage and Fracture. Springer.